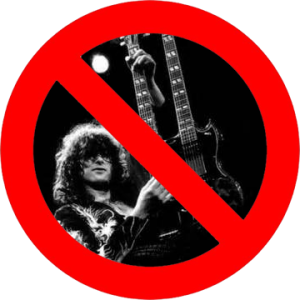 Have you ever been listening to a song and thought to yourself, “Hey, that sounds like…”?

I’ll be presenting an occasional series on those times when two (or more) songs sound similar in some way, possibly coincidentally or possibly not (but I’m willing to give anyone the benefit of the doubt).

OK, let’s start off with something rather well known.

Here’s the beginning of Led Zeppelin‘s “Stairway To Heaven“:

And here’s an excerpt from a song called “Taurus” by a band called Spirit:

“Taurus” comes from Spirit’s 1968 self-titled debut album. Spirit was a psychedelic band from California, and the album is so much a part of that era that I’m finding it difficult to resist putting the word “man” at the end of every sentence.

“Stairway To Heaven” was released in 1971. It has been suggested that “Stairway” author Jimmy Page ripped off “Taurus”. I was going to suggest that Jimmy Page possibly had a large record collection in the Sixties and unconsciously delved into it whilst composing “Stairway,” but I just consulted Wikipedia who tells me that Led Zeppelin supported Spirit on a 1968 tour, and that Led Zeppelin were “heavily influenced by Spirit”.

You’re not wrong there, Wikipedia.

By the way, courtesy of Mr Page’s filching, whenever I listen “Taurus” I always expect to hear this:

No matter what’s actually there on the Taurus recording, that’s what I hear in my mind. Every single time.

Incidentally, if you’re keen on hearing how the whole thing sounds, here’s “Taurus” in its entirety:

And if you’d like to hear “Stairway To Heaven” (yet again), here ’tis:

(*I had originally typed “Curse you, Page!” but quickly decided it would be wise not to. I have a feeling that because of Jimmy’s interest in the occult, it’s precisely the kind of thing Jimmy used to do – and, for all I know, still does – to other people, and I don’t want to court any bad vibes, man. No hard feelings, Jimmy – but next time, would you mind letting people know when you’re going to borrow their music?)

This entry was posted on Wednesday, May 27th, 2009 at 6:30 am and is filed under 1960s, 1970s, Led Zeppelin, Musical coincidences, Spirit. You can follow any responses to this entry through the RSS 2.0 feed. You can leave a response, or trackback from your own site.