Song of the day: Col Joye – "Come Into My Life"

Today’s song was suggested a few weeks ago by my friend Col (Hi, Col!). When I first heard it I thought, “What a horrid song! I wouldn’t want to inflict that on people. What where you thinking, Col?” etc, and left it at that, deciding never present it to anyone.

But for absolutely no reason I can think of, the song in question popped into my head just a few hours ago – and now it’s stuck there.

I think the only way I can get it out of my brain is to hand it over to someone else, so…

I wondered if that was a Col Joye original, but I discovered (after three seconds searching on the Internet) that it’s not. Here’s the original:

Song of the day: Robert Fripp – "You Burn Me Up I’m A Cigarette"

Believe it or not, the singer on “You Burn Me Up…” was Daryl Hall. Yes, that Daryl Hall.

The track appears on Mr. Fripp’s 1979 solo album, Exposure. Now, because I like this album a lot, I’d like to pester you with a couple of other tracks from it. First up, here’s the intense instrumental “Breathless”:

And if that wasn’t heavy enough for you, here’s “Disengage” featuring strangulated vocals by English singer-songwriter Peter Hammill:

Song of the day: The Wellingtons – "I Get My Heart Broken Every Day" (acoustic version)

Even when the guitars are turned down it’s still a great power pop song:

And if you’re wondering what it sounded like originally…

I don’t know if I’ve mentioned this before, but I like The Wellingtons.

The Wellingtons on MySpace

Song of the day: Skyhooks – "Women In Uniform"

Incidentally, Iron Maiden recorded a version of it, but I’d rather not talk about that.

Song of the day: Max Merritt And The Meteors – "Hey, Western Union Man" 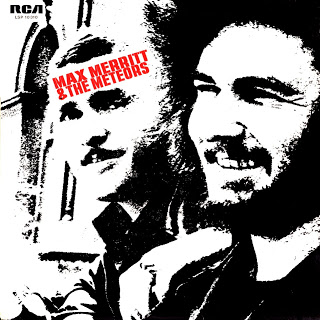 One of my friend Frank’s suggestions from yesterday was a song called “Western Union”. That title instantly reminded me of:

Max Merritt is a chap from New Zealand who came over to Australia in the Sixties and made it big (well, big in Australia).

I was surprised to discover that there are quite a few versions of this particular ditty (I had foolishly thought that there were only those two). However, Max’s is the only Australian(-ish) version that I’m aware of.

I have to say that after listening to quite a few renditions of this particular ditty, the one by Max Merritt And The Meteors is still my favourite.

Is it possible to like and dislike a song at the same time? Because that’s the feeling I had when listening to this. That “Da da-da da-da” sure does stick in your mind. I can’t really add much more about this song, apart from noting that it sounds very much of its time (1967). But overall, I like it – and I don’t like it. Oh, and the title of the song reminds me of another song that will be Song of the day the day after this batch of songs goes on the blog. (Note to self: That’ll be tomorrow, Peter. Don’t forget.)

You won’t believe this coincidence (I’m having trouble believing it myself), but I was actually reading about The Jags just before playing this song. Earlier in the morning I had responded on the blog to commenter Jon about his love for the All Music Guide, and mentioned that I thought it was great, too, but hadn’t pestered it recently. This prompted me to pay it another visit, and while I was there I spotted AMG’s section on Power Pop. I duly clicked on the link, started reading the article, skipped to the end (there was a lot to read, and I wanted to get to the more recent stuff) where it talked about the newer generation of power pop bands. One of the bands mentioned was The Jags. I’d never heard of them before, so I clicked on their AMG profile, read about their debut album, Evening Standards (1980), and clicked on the review to read more. “Hmm, that sounds interesting,” I thought to myself. “I think I’ll have a listen.” I found the album, and while it was hurtling its way down the wires I decided to read your email and start listening to your suggestions. I saved them to the hard drive, listened to The Five Americans track first, then saw the next track, “Back Of My Hand”. It was by The Jags.

Anyway, back to “Back of My Mind”…

I pressed “play” and stopped it after only two seconds. I was amazed at the intro’s similarity to an extremely well-known song. As I was thinking “What a blatant rip-off of ‘Friday On My Mind‘!”, I pondered the possibility of a future Musical coincidence. However, there followed an internal monologue:

I played the rest of it, and was relieved that the whole thing didn’t sound like “Friday On My Mind”. But I did discover why the AMG reviewer mentioned how The Jags were dismissed at the time for sounding like Elvis Costello: the singer sounds like he’s impersonating Elvis Costello. If I remove thoughts of Elvis Costello, then what I hear is a competent three-chord skinny-tie song – just like piles of other skinny-tie songs.

Link
To me, this was one big musical coincidence involving two other songs. The verses in “My Pledge Of Love” (e.g., 0:16-0:38) remind me a lot of the verse in The Platters‘ “Twilight Time“, and the middle eight reminds me of the Four Tops‘ “Baby I Need Your Loving” – especially when the Joe Jeffrey Group’s singer is singing “Baby I need your loving / Got to have all of your loving…” (from 1:36 to 1:41). It’s all a bit too much of a remind-y song for me. The singing’s OK, the playing’s OK, but it doesn’t leap out at me and make me want to shout “Soul! Yeah!”.

I don’t say this very often when listening to a song, but I said it as soon as this song started: “Yuck”. Then the singing started. Extra yuck. And the hand claps! And then that synthesizer! Yuck, yuck, yuck. Something I found disconcerting was the harmony singing (one singer in the left channel, one in the right). To me, the two singers didn’t harmonise at all, they just sounded like two separate singers. Weird. And then there was that horrid middle eight with those ghastly synthesizer riffs, followed by an odd little ska-inflected rhythm (at 2:11) that’s unrelated to the rest of the song. However, I have to admit that by the end of the song I thought that the melody of the line “All the people tell me so / But what do all the people know” was catchy. There’s a guitar part in the song (it occurs a few times, such as 1:54-1:57, and a really prominent one is at 3:37) that reminds me strongly of something, but I can’t figure out what it is. It’s frustrating, because it’s such a strong likeness to that other tune but I can’t for the life of me remember it. Grrr. Despite all of the aforementioned comments, this is probably the catchiest song in this week’s bunch of suggestions. (But I don’t want to catch it.)

Sugar – “If I Can’t Change Your Mind” (1992)
This, to me, is the sound of Bob Mould chasing commercial success. That’s entirely reasonable, considering his previous band’s lack of monetary gain and fame*, but it tends to dilute the music and lends it a certain anonymity. Is the word “generic” too strong here? The song was listenable while it was playing, but at soon as it finished I’d forgotten how it went.

It might not be a great song, but I think it has a great beat.

By the way, that beat is one of the reasons this is one of my favourite Paul McCartney songs:

Song of the day, Stevie Wright |

Song of the day: Priscilla Ahn – "Find My Way Back Home"

Do you believe in love at first sight listen?

Song of the day: Welcome To Ashley – "These Dreams Of Mine"

There’s a chap called Kevin (Hi, Kevin!) who emails me quite regularly to let me know about loads of bands from Chicago. He’s already told me about two others – The Maybenauts and Jonny Rumble – and now there’s another one called Welcome To Ashley. Just how many bands does this Kevin know?*

In the unlikely event that somebody ever asks me, “Hey, Peter, why do you like Western Swing?”, I can answer them with this: