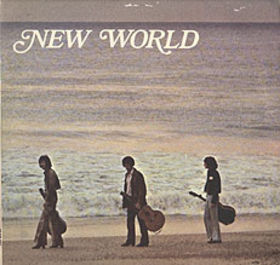 Here’s Australian pop band New World with a song about Wild West cowboys which, as far as I’m aware, didn’t exist in Australia:

No, I don’t know why either. But I do like the 12-sting acoustic guitars. They were my favourite part of the recording.

Incidentally, “Cowboy Convention” was suggested by my friend Col who may or may not have a warped sense of humour. (“Hey, Peter, I’ve got a song by an Australian band singing about American cowboys. Tee hee!”)

The main reason that New World was singing about cowboys and not stockmen (the Australian equivalent of cowboys in ye olde days) is that they didn’t write it. Here’s the original version by the more appropriately American* band Ohio Express:

Apart from the pretty dire singing, it’s a nice little bit of bubblegum.

I’m guessing that “Cowboy Convention” came about as a result of “Indian Giver” by the 1910 Fruitgum Company, because the rhythms of each song sure are similar.

(Both songs were released in 1969 – “Indian Giver” in January and “Cowboy Convention” in November.)

As well as the two versions above, there’s only one other version that Col and I are aware of. It’s by country singers Buddy Alan and Don Rich, and it’s possibly my favourite version (they make it a country song which makes more sense to me, considering the lyrics) except for that dreadful trumpet part:

(*Well, if you’re going to sing about the Wild West and cowboys, I think it helps to be American.)

This entry was posted on Thursday, June 17th, 2010 at 6:30 am and is filed under 1960s, 1970s, Buddy Alan and Don Rich, New World, Ohio Express, Song of the day. You can follow any responses to this entry through the RSS 2.0 feed. You can leave a response, or trackback from your own site.