Song of the day: SpongeBob & The Hi-Seas – "The Best Day Ever" 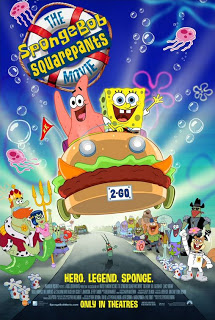 Yesterday’s post, featuring Brian Wilson Band member Scott Bennett and his version of the Pet Sounds track, “I Know There’s An Answer“, reminded me of another Wilsonesque tune…

A few years ago I went to the cinema with one of the junior campers (Hi, Natalie!) and we watched The SpongeBob Squarepants Movie.

(Don’t worry: I will get to the point very shortly.)

Anyway, as the end credits of the movie rolled along a couple of songs appeared. One of them was an absolutely superb rip-off of Pet Sounds-era Brian Wilson that tickled my ears relentlessly until I couldn’t take it anymore and shouted to myself: “That’s great!”.

This is what I heard:

(*My favourite is Puffy’s “December”.)

This entry was posted on Sunday, September 12th, 2010 at 6:30 am and is filed under 2000s, Song of the day, SpongeBob and The Hi-Seas. You can follow any responses to this entry through the RSS 2.0 feed. You can leave a response, or trackback from your own site.