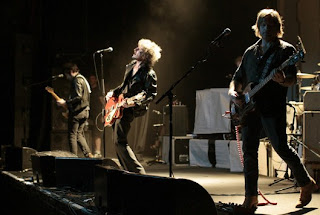 Just over a week ago I played you You Am I‘s version of an Easybeats song (“She’s So Fine”) that was recorded live in 1996.

I thought You Am I did such a splendid1 marvellous job on that song that I want to play you another cover version they recorded live (at the same gig). This time they chose a song from obscure2 English 60’s band The Creation:

Unnecessary Text Formatting Aside: I’m toying with using numbers instead of asterisks for my pointless footnotes. If you feel strongly either way – and there’s absolutely no reason why you would, unless you were a pedant like me – then let those feelings be known and tell me why either method is totally right or totally wrong.

(1I’ve just noticed that I’ve been using the word “splendid” way too often in the last few days. I guess “splendid” was Word of the Week in the Peter household. I think I’ll make “flibbertigibbet” next week’s overused word.)

(2I’d never heard of The Creation before, but if you have then feel free to ignore the word “obscure” in that sentence.)

This entry was posted on Saturday, March 19th, 2011 at 5:30 am and is filed under 1990s, Song of the day, You Am I. You can follow any responses to this entry through the RSS 2.0 feed. You can leave a response, or trackback from your own site.