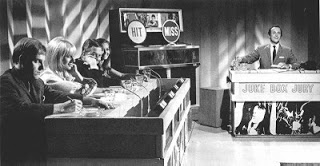 Today’s coincidence is a double-header, with two Australian songs unconsciously borrowing from one American song.

Last week there was a Song of the day by Australian musician Bryan Estepa. The song was “Tongue Tied”, and a bit of it reminded me of a part of Del Shannon’s “Runaway”.

Well, today’s Song of the day musician (see above) is also Australian, and a bit of one of his songs (not today’s) also reminds me of a part of “Runaway”.

Here are them coincidences:

And the full versions:

What is it with Australian musicians and “Runaway”?

Oh, before I finish this post I want to mention the video for “Pasha Bulker”. It appears that he’s either a) trying to catch some fish for his girlfriend to win her back; or b) he’s given up the idea of winning back his girlfriend and has gone off to what might be the Australian maritime version of the French Foreign Legion…

And by the way (yes, I will get around to finishing this post), the Pashsa Bulker is an actual ship. It’s a bulk carrier, it’s enormous, and it ran aground off the coast off new South Wales in 2007. But my favourite factoid about the ship is the name of the company that owns it: Japanese Disponent Owners.

This entry was posted on Thursday, June 16th, 2011 at 6:25 am and is filed under 1960s, 2000s, Bob Evans, Bryan Estepa, Del Shannon, Musical coincidences. You can follow any responses to this entry through the RSS 2.0 feed. You can leave a response, or trackback from your own site.