Sorry, that may have been a bit cryptic. You’ll probably want a bit of an explanation…

All the Songs of the day for this week will be from artists that are mostly new to me. This is the direct result of having received a gaggle* of emails last week from a whole heap of artistes who were keen on me being keen on letting people about their latest musical efforts (as in: “Hey, Peter would you mind playing one of our new songs on your blog?”). I’m always keen on playing new songs by new artists, so I thought to myself: “A-OK / No problem / Glad to / It’d be a pleasure / Bring it on, baby / etc.”

Incidentally, I don’t know if this is a spooky coincidence (or just a regular one), but I received almost all of those emails on the same day (Friday). It’s taken me until this week to get these songs on the blog because I listened to all of them. I have a general rule of listening to every song that goes on the blog (except Miley Cyrus), and although I didn’t like everything I heard I don’t want to stand in the way of you hearing something that you might like.

I’ll try to make this week as fair as possible to all concerned by:

a) presenting you with precisely what I was sent (I won’t leave anything out);
b) letting you know what I think the music sounds like before you venture into “OK, I’ll play it” territory; and
c) giving you the opportunity to ignore anything I present to you.

Let the journey of discovery begin!

First up, we have an Australian chappy by the name of Carus Thompson. Actually, Carus has been featured on the blog before, but today’s track is the new single from his latest album.

What I think it sounds like: slightly gentle, slighty rootsy rock. (I may be wrong.)

(*Is that the correct term for a group of emails?)

Song of the day: Carus Thompson – "You Can’t Find Me" 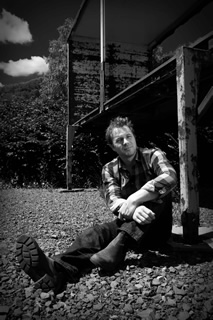 Do you remember Will, the chap I mentioned the other day who’s trying to look after some sea slugs? Well, he’s now pointed me in the direction of someone else he’s looking after. This time it’s a rockin’ rootsy rockin’ rocker (or something like that) called Carus Thompson. Come to think of it, Carus may not be terribly keen on being described in those words – maybe he’d prefer something a bit more dignified like “a gentlemen named Carus Thompson esquire” instead.

Will told me that “You Can’t Find Me” will be appearing on Carus’ forthcoming album, Caravan. It’s actually Carus’ fourth album, so calling it “forthcoming” is entirely appropriate. (I found a pun without even trying. I like puns.)

I think that’s enough of that nonsense. If you haven’t already pressed “play”, then feel free to do so now. But only if you want to.