Song of the day: David Myhr – "The Things We Do For Love"

Here’s the original, in case you’re the kind of person who listens to cover versions of songs and thinks “Hmm, how does it stack up to the original?”:

Watching this video of powerpopper David Myhr getting to grips with the guitar solo in 10cc‘s “The Things We Do For Love” reminded me of two things:

Link
(Live in 1977 – guitar solo played by Rick Fenn. Eric Stewart is on the piano, not playing the solo. Grrr.)

(*If you’re not au fait with 10cc, Eric Stewart is the chap who played the solo on the original recording.)

We continue our exploration of PUSH (Peter’s Uninteresting Shopping Habits) with a track from David Myhr‘s Soundshine, a splendid, splendid pop album:

I’m extremely glad I bought the CD – not just because of the songs (which, as alluded to above, are splendid), but because of the packaging. It’s rather good. It comes with a 16-page booklet and everything. You don’t get that with your puny little downloads.

My favourite track on the album is “Icy Tracks”, but one odd thing about it is that it also contains my least favourite part of the album. The first three minutes and fifty-seven seconds of the song is supremely superb power pop, but the last minute-and-a-bit is taken up with (for me) some pointless backwards-ness. I don’t know why David decided to add an extra minute to an already-long-enough song – but he’s the chap who wrote and recorded it, and I’m not about to challenge the artistic decisions of others. (I’m an easy-going, non-confrontational kind of guy.)

So, with that minor gripe out of the way, please enjoy four-fifths of “Icy Tracks”:

By the way, David has made an audio file comprising all the choruses from the album which displays his melodic handiwork:

This post is slightly complicated, so I’ll let the artist himself explain what’s what (and what’s not) involving a couple of bonus tracks on his new album, Soundshine:

With only two days left to the world premiere release of my album Soundshine in Japan [N.B.: it was released on December 7] I am happy to share with you a glimpse from the recording of an exclusive Japan-only bonus track called “Boom Boom Beat”.

It was originally written for Puffy [see below] so this is my “cover version”. (First time ever I make a cover of my own song!)

The basic tracks were recorded at the drummer Andreas Dahlbäck‘s Durango Recording in Stockholm together with Rikard Lidhamn on bass and Anders Pettersson on guitar, and vocal overdubs and mix were made at Marcus Black’s Jelly Road Studio also in Stockholm. On this track I am fortunate enough to have Puffy themselves contributing background vocals (thank you so much Puffy!!!). Their vocals were recorded in Tokyo and unfortunately I didn’t have the possibility to ‘stop by’ and capture that moment with my iPhone (which is the case with the rest of the material). So the video will be somewhat male-dominated. Anyway – hope you like it!

The only place that you can get hold of “Boom Boom Beat” is on the Japanese version of Soundshine which will be released on Dec 7, 2011, on Thistime Records.

More about the Japanese release, the original version of Boom Boom Beat, and links to an interview about my songwriting for Puffy in this previous blog post.

The Japanese version of the album will have of two bonus tracks. Both are songs that I originally wrote for the phenomenal and famous Japanese artist duo called Puffy (a.k.a. PuffyAmiYumi). The first one is an exclusive “for Japan only” song called “Boom Boom Beat” [see above].

The second bonus track is called “Record Collection” and it’s a song I’ve written together with the extremely talented and succesful Swedish songwriter Peter Kvint who I had the pleasure to get to know during a songwriting camp in Tokyo a couple of years ago. Puffy released it earlier this year as their 15th anniversary song which was kind of logical since in their version it was called “Happy Birthday”.

So in some funny way my new versions will by “covers” of my own songs. Confusing indeed! I had a lot of fun returning to the songs again, and recording them in my own way and the best thing is that Ami and Yumi from Puffy were kind enough to lend their vocal services adding some background vocals to these versions so the two bonus tracks will be “David Myhr feat. Puffy”.

More about my songwriting for Puffy in an interview from 2009 in a Puffy fan site called PuffyAmiYumiWorld.

For those in the rest of the world who are very eager to hear the album, or are in desperate need for the ultimate Christimas gift – please feel free to investigate the possibilities of international orders either from Thistime Records Onlinestore or here at CD Japan. But rest assured that there will be a European release in the spring of 2012. To stay tuned for updates, just subscribe to this blog and “like” my Facebook page.

Song of the day: David Myhr – "Looking For A Life"

Swedish power popper David Myhr (he of the now-defunct The Merrymakers) has released a new song from his soon-to-be-available and I-can’t-wait-to-buy-it debut solo album. Here ’tis:

Song of the day: David Myhr – "Got You Where He Wanted" 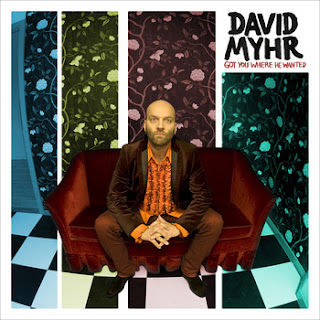 I was all set to play you an Australian ditty today, but that’s going to have to wait because I just found out that non-Australian David Myhr, one-half of (now-defunct) Swedish band The Merrymakers*, is about to release an album and has made one of its songs available for free. As far as I’m concerned, this is Mighty Good News.

And here’s some rehearsal footage of “Got You Where He Wanted”. I like it as much as the final result:

(*Which reminds me: I don’t think I’ve ever played you anything by The Merrymakers. I think I’ll have to very shortly.)