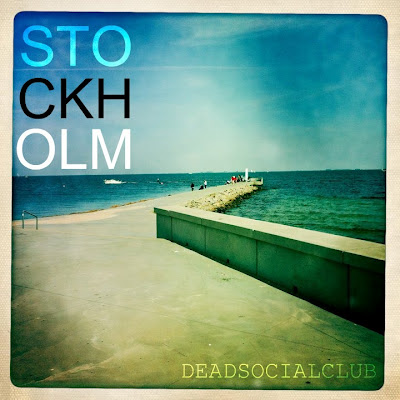 A chap by the name of Paul (Hi, Paul!) emailed me asking if I wouldn’t mind having a listen to his band and possibly mention them on the blog.

I must admit that the answer to that kind of question is always an enthusiastic “Yes! Yes! Yes!”. I love being given the opportunity to hear music I haven’t heard before. And thanks to this particular blog, I get that opportunity quite often. I tell ya, this blogging lark has its perks – not the least of which is receiving emails from people living anywhere in the world. (Well, anywhere where there’s electricity and an Internet connection.)

The band is called Dead Social Club, and they’re from sunny old miserably wet sunny old England. (Paul The Emailer is the lead singer.) They’ve been described as alt-indie-post-punk. The band says that someone said they sounded like “The Cure meets Depeche Mode, with Joy Division featuring”.

So far I’ve heard only about four of their songs, but I must admit that of the ones I did hear I didn’t think there wasn’t much Joy Division in them. (Maybe I’m not familiar enough with Joy Division – having never listened to anything other than what’s appeared on the radio – to notice any similarities.) And I thought there was no Depeche Mode at all. (It was very easy for me not hear any Depeche Mode because, like Joy Division, I’ve heard next to nothing of that particular band’s oeuvre.) I did hear a bit of The Cure, though, but that was only in two of the songs.

By the way – and this is extremely trivial – the band’s name and today’s main song reminded me of two things:

1. The band’s name reminded me of a band called Dead Letter Society. They’re also from England.

2. The song reminds me of Muse’s “Stockholm Syndrome” – only because they both have “Stockholm” in their titles.

How about I stop waffling on and ask you to simply play today’s song? (Sounds reasonable to me.)

I don’t know about anyone else and their “They sound like…” pronouncements, but for me “Stockholm” was reminiscent of Bloc Party. And the start of the song, especially, reminded me (a lot) of U2. So there are two more bands that Dead Social Club can add to their “Stop Comparing Us To Other Bands!” list.

Oh, and here’s another comparison (sorry, guys). This one reminds me of Killing Joke:

If you’re interested in hearing more from this alt-indie-post-punk-whatever-it-is band, you can do that very thing over at their Bandcamp page.