Song of the day: Grand Atlantic – "Theme Song For The Day"

Today’s song by Grand Atlantic sits unobtrusively and unheralded-ly in the band’s early, early EP (it was their first official release). I think the song is too good to languish in Obscure EP Land. I think it deserves to be extracted from that EP and placed front and centre on a blog so that people can hear it and say “Hey, that’s not a bad song – what’s it doing stuck in an obscure EP?”:

Boy, this riff sure is popular. It was only a few weeks ago that I noticed a tune in The Move‘s “I Can Hear The Grass Grow” that appears in a couple of other songs. (Gruesome details here.) Now I’ve found it in another song.

First, though, a reminder of the original tune. In “I Can Hear The Grass Grow” it’s the “Get a hold of yourself now baby” part in the song’s middle eight:

In addition to the other two songs I found that tune, this time it’s in Australian band Grand Atlantic‘s “Smoke And Mirrors”. I heard a guitar near the start of the song playing something suspiciously familiar (it’s in the right channel):

In the same song, another guitar plays it later on (this time it’s in the left channel):

I’ve just noticed that the previous two Songs of the day have been from the 80’s. In an effort to modernise this ol’ blog, I’ll play you a song by Grand Atlantic from their latest album, Costellations:

Now I feel up to date.

Song of the day: Grand Atlantic – "Moth And Rust"

Here’s Grand Atlantic with the inexplicably-titled “Moth And Rust”:

Maybe I should listen to the lyrics. That might explain things. Maybe.

Song of the day: Grand Atlantic – "Only Time" 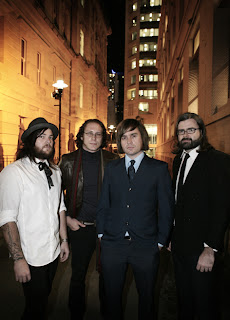 The estimable Popboomerang Records has released Electric & Eclectic, an album of rarities from a whole heap of artists on the label who each contributed a spare track they had lying around. Although Popbooomerang prides itself as a record label that promotes power pop artists, it has in recent years broadened its scope to include music of the softer variety from musicians such as folkies, arty types, and a few “how do you categorise that?” artists.

You can hear Electric & Eclectic over at Bandcamp if you’re in the mood to listen to an album full of non-power-pop chaps and chapettes.

However, power pop band Grand Atlantic supplied a track for the compilation, and they certainly chose a weird one to add. The performance itself isn’t weird (it’s lovely, and full of dreamy vocals), but it’s the choice of song that would get a lot of people scratching their heads.

So, here are Grand Atlantic gettin’ all dreamy on ya:

And, here’s the original – believe it or not:

I, for one, am glad they did, because I probably would have never known about it otherwise. After being told by the rock music cognescenti for years that Enya’s music is useless, laughable, and not worth any ‘true’ rock fan’s time, it’s nice to finally hear a song by hers that isn’t the one constantly sniggered at (namely: “Orinoco Flow“). And now, thanks to Grand Atlantic’s choice of cover, I’ve heard Enya’s “Only Time” – and I can happily say that I like it.

Song of the day: Grand Atlantic – "Poison To The Vine"

Incidentally, I nicked that song from Grand Atlantic’s song giveaway page after I read about it at Absolute PowerPop. Thanks, dudes.

(*In the MP3 tag of the song, the album is listed as “TBA” which, I presume, means “to be announced”. Hey, guys: why not just call your album TBA?)

Song of the day: Grand Atlantic – "Until It’s Gone"

I received an enthusiastic email the other day that let me know about the new-found popularity of Grand Atlantic courtesy of a three-year-old song and a television program:

Hot on the Heels of Their Critically-Praised Ripple Music Debut, Grand Atlantic Light Up the Soundtrack of Gossip Girl

Following hot on the heels of the success of their Ripple Music debut split 7″ single, Grand Atlantic keep the pedal to the metal, building momentum and converting the uninitiated to the Grand Atlantic ranks.

Taken from Grand Atlantic’s massively praised second album “How We Survive,” the hot single “Used to Be the Sensitive Type” was remixed and remastered for inclusion on the Ripple Music split single which also featured the KEXP Top 20 hit by Sky Parade, “I Should Be Coming Up (But I Keep Coming Down).” Since then, things have only gotten busier for the Australian band.

Locked in the studio working on songs for their 2011 third album hasn’t kept Grand Atlantic from touring Japan and readying another US tour in 2011. With dates already set from coast to coast, including a four-day stay at SXSW, fans will have plenty of opportunity to catch Grand Atlantic’s heady, trance-inducing psychedelic pop single. And the US audience is definitely catching the Grand Atlantic wave. The first episode of season 4 of the hit TV show, Gossip Girl featured Grand Atlantic’s “Until it’s Gone,” bringing in tons of new fans. The video for “Until It’s Gone,” featuring footage from the recent Japanese Tour garnered thousands of hits after the band’s Gossip Girl debut.

Check out the video http://www.youtube.com/watch?v=_KcZE5bv3nw and hear the song that captured the hearts of Gossip Girl fans everywhere.

Pressed in extremely limited quantities, the Ripple Music’s 7″ split single (pressed on glowing orange vinyl) is still available through www.ripple-music.com and can be found everywhere on Grand Atlantic’s tour.

“Gives Oasis a run for their money.” (Courier Mail, AUS)

“Grand Atlantic molds the psychedelic post-punk ethereal moods of their countrymen, The Church, with the shoegazing swirling madbeat of The Stone Roses, and toss in a touch of garage crunch à la Ripple favorites The Thieves just for kicks. The results of this combination of psychedelic distillery are intoxicating…”(The Ripple Effect, USA)

“…This is the excellent album Oasis should have done after What’s the Story Morning Glory but didn’t…”(Lucid Culture, USA)

“Grand Atlantic’s second full-length album is chock-full of pop rock, with big sounds, singalong hooks and catchy melodies… How We Survive is a masterfully crafted record.” (Time Off Magazine, AUS)

Here’s the song that ended up on Gossip Girl:

And here’s that remixed version of “Used To Be The Sensitive Type” (2010):

If you’re wondering what that sounded like before an audio person pestered it, here ’tis:

Incidentally, I’d already posted about “Used To Be The Sensitive Type” – it was Song of the day just over a week ago. Spooky.

I have no idea why the chaps in the band called the song “Coolite”. Maybe the lyrics explain it. Who knows? (Note to self: read the lyrics, Peter.)

Anyway, “Coolite” appears on the band’s debut album, This Is Grand Atlantic (2006).