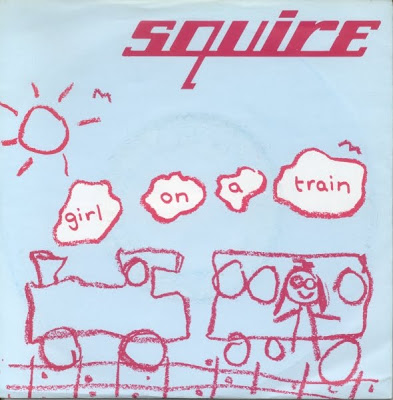 This week Michael has suggested a song I’ve never heard, by a band I don’t know. Excellent.

The song is “Girl On A Train“, and the band is Squire. The only thing Michael told me about the track was that the band were from the UK.

0:00-0:05 – I like how “Girl On A Train” starts, with the drummer replicating the sound of a train. It instantly reminded me of this piece of Australian rock history:

Focus, Peter. Back to the Squire song.

0:05-0:06 – I like that drum roll. I didn’t notice it the first time I heard it, but then I cranked up the volume and heard a nice subtle roll followed by syncopated snare hits. Very nice. (And sorry about using fancy musical terms for something that lasts only a couple of seconds in a song.)

0:07-0:19 – Ah, it’s a skinny tie song. With a cute guitar melody. And handclaps. I like it. Because it’s going on and on a little bit with its instrumental-osity, I’m beginning to think this is going to be an instrumental a la The Shadows. That’s fine by me, because I love The Shadows. (Twang!)

Unbelievably useless trivia: The rhythm guitar in the left channel is very slightly out of tune. (It sounds like the A string to me.) And the bass guitar part is unimagiative because it’s playing nothing more than what the twangy guitar is playing.

0:19-0:26 – Oh. The singing started. It’s not an instrumental. Ah well. This is the verse, and I like the vocal melody. But I’m not entirely liking the guitar mimicking it. I’d much rather hear the guitar harmonising with the vocal melody than just doubling it. That would make it more interesting to me as a listener. I’m still liking the song though.

More trivia: The bass guitar part in the verse is much more imaginative.

0:26-0:30 – I’m having a bit of trouble with the lyrics here. I don’t know if it’s the singer’s accent, or if it’s my ears, but there’s a word in the second-half of the verse that I can’t quite figure out. As far as I can tell, he sings “Won’t you tell me, you’re gang girl on the train”, but that doesn’t make any sense because boys don’t ask girls if they’re “gang”. (“Hi, are you gang girl”?) I’d love to know what he’s actually singing, but the more I hear it the more I keep hearing “you’re gang girl on the train”. Grrr. Hang on, I’ll consult the Internet…

I’ve consulted the Internet, and I’m pleased to let you know that the “Girl On A Train” available at Bandcamnp (the one I used for this post, above) contains the lyrics. Woohoo!

Here are the lyrics to the first verse:

So it’s “game”. That makes more sense. However, because the two distinctly separate lines (“Won’t you tell me your game” and “Girl on the train”) are sung continuously I thought it was one line. In other words, I was confused.

Back to the rest of the song.

But it can’t be denied: both songs are about seeing a girl on a train. (Lyrics to “You’re Beautiful”.) No! Make it stop! Make the comparison stop! Please!

Allow me a few moments to compose myself…

Now, where was I?

It’s awkward lyrics time: from 1:05-1:07 the singer sings the line “That would be a groove to me”. It comes out awkwardly because he has to squeeze “groove to me” in a very short amount of time, and ends up having to rush the words. Why didn’t he just sing “That would be so groovy”? Phrasing-wise it’s metrically even, with one syllable for each note. Easy.

1:11-1:26 – It’s the middle eight – and I’ve realised that although we’re only at the half-way mark in the song, I’ve typed far too much already. Gulp. Anyway, I’ll plough on and try to shorten things.

This middle eight is fun. I was surprised when I heard the background vocals sing “Choo-choo choo, cho-choo choo…” That’s silly. But fun.

Trivia: In that twin-guitar solo from 1:39-1:52 the chords are F sharp minor to D major with a little switch to D minor thorn in at the end. The bass guitarist forgot about the change to D minor, and keeps playing as if the chord is still D major.

2:18-2:48 – Well, that was a slight surprise. It’s another middle eight. (It’s not a different one. It’s the same as the other ones, with the “choo-choo choo…”.) And this one has a lyrics problem. The singer begins this middle eight with “Do you live at home with your mom and dad?”. He crams in “Do you live at…” at such a speed that it almost becomes gibberish. (The vocals being double-tracked here doesn’t help either.) But admittedly it’s a minor thing, as the middle eight whizzes by on its way to a repeat of the main tune and the finish.

I liked “Girl On A Train”, despite it reminding me lyrically of a James Blunt song I have no desire to remember.

One criticism I’d level at “Girl On A Train” is that it’s basically one good tune surrounded by a whole lot of forgettable filler. To me, that doesn’t make for a great pop ditty. (I’d like to hear at least three memorable tunes in a good pop song.)

But apart from that, I found it enjoyable in an “It’s alright while it’s on” kind of way.

“Hey Peter: now that you’ve heard that song, isn’t the music of the 1980s much better than you remember?”

…the answer to his question is, for the 19th week in a row: