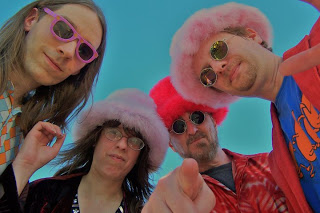 An amazingly productive band called Orange Hat emailed me to ask if I’d have a listen to their music. My response was “Yes, please!” (as it usually is when people let me know about music I haven’t heard before), so I was electronically escorted to their Bandcamp page where I found a dauntingly large amount of songs. Orange Hat’s discography there listed five albums, each having an entirely unreasonable amount of songs on it.

Pardon me as I get mathematical. I feel I need to do this to show just how daunting the task of listening to Orange Hat is:

And those albums all start with the letter “P”. Why?

Anyway, I set myself the task of listening to all those songs. So I did. But I have a terrible admission to make: I didn’t listen all the way through each of those 80 songs. The typical scenario for what I ended up doing is this: I’d listen to half a song, get a feel for it, then look at the track list and squeal “Eek! Too many songs!”

Nevertheless, I did listen (albeit partially) to every song. For this post, and for the purposes of brevity (!), I’ll try to give an overarching view of the band’s oeuvre by playing you what I hope are representative songs from each album.

The Songs (a mercifully small selection)

When I paid attention to the lyrics (admittedly it wasn’t often, because I was concentrating on the music), I noticed that they were distinctly odd.

The lyrics to “Job & Shovel” will give you an idea of how pop music has the power to warp young minds:

What gets on your nerves?
Nothing more than feelings
And I’d rather gnaw my arm off
Than live out this horrid snafu

Probing Questions For The Band

Before I finish this particular post, I have some questions for the band about some of their songs (I hope they’re reading this post)…

1. In “Coffee & Key Lime Pie“was that a bass mistake at 1:01?; and are they deliberately dreadful background vocals?

2. In “Go Cart Bullet Train” was that paraphrasing of the “Taxman” guitar solo intentional?

3. In “I Got A Bendy“were you guys trying to mess with my mind?

4. In “Skydiving!“the main guitar riff reminded me of “Rock Lobster“. (I know that wasn’t a question, but I wanted to tell you anyway.)

6. Why is the guitar solo in “Cartoon Dead“so bad?

7. In “My Favorite Room“did you rip off the “I Feel Fine” guitar riff deliberately?

8. Why does the singing sometimes remind me of Glenn Tilbrook, especially in songs like “Squidhead Farmplow“and “Girlfriend Ex“? (Sorry, that was more of a rhetorical question. You don’t have to answer that.)

9. Where you trying to sound like Devo in “The Visible Man“?

10. The less I say about “Hellfire!“the better. (That wasn’t a question at all. It was more a “Please don’t ever record anything like that again” statement.)

A Plea To Other Bands

If you’d like me to listen to your music, I’d be happy to. But please don’t send me your entire back catalogue. Thank you. I think I’ll have a little lie-down now.