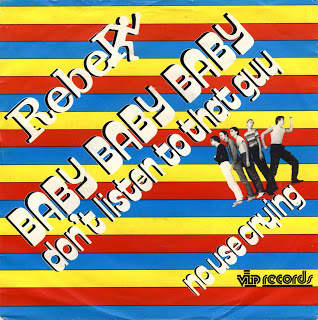 This week’s suggestion by Michael is “Baby Baby Baby” by Rebel. It’s a song from 1982, and The Michael told me two things about the band:

That was all I knew about it until I went looking for more information. (I like to know what I’m up against with these obscure songs Michael sends me.)

Unfortunately, the Interwebs didn’t tell me much. According to “this page, “rotjoch” mean “little pest”. I also found out that in addition to the song being released in 1982, for some reason it was reissued the following year with different artwork, and was credited to “Rebel (featuring Waldo)”.

And that’s everything I know about Rebel’s “Baby Baby Baby”.

Now that I’ve flaunted my total knowledge of Rebel and their song, I’ll have a listen to the little critter.

0:00-0:19 – Yum. This is a very promising start. This introduction instantly reminded me of two things:

I think that song is sublime.

But back to “Baby Baby Baby”.

Now that the verse’s vocal melody is getting stuck in my head, it’s reminding me of something else. Unfortunately, I don’t know what that something else is at the moment. Hopefully, I’ll think of it soon.

Nope. Can’t think of it.

0:34-0:49 – Here’s the chorus, and I think it’s cute. It’s not all that different from the verse, so I’m slightly disappointed that it doesn’t distinguish itself from the verse by containing… well, containing something other than music resembling the verse.

Very nice singing from 0:57-1:00. Unusually, though, when the singer sings “several” at 1:03, his phrasing on the last syllable sounds like he was Auto-Tuned. Considering this record was released in 1982, that blows my mind a little.

There’s a nice drum fill leading into the next chorus (1:03-1:04) – although the high tom-toms (the first drums played in the fill) sound to me like bongos.

1:03-1:20 – This chorus has a weird vocal interjection. The singer begins the choruses with “Baby baby baby”, but in this chorus the third “baby” is accompanied by background vocalists singing a harmonised “baby” fairly loudly. The net effect for me is “Baby baby BABY!“

Despite the startling “BABY!“, I still like the chorus.

1:20-1:50 – A two-part guitar solo, and I think it suits the song admirably – although I’m not entirely sure why the guitar solo had to be in two parts. (Unless it was two guitarists sharing the time allotted for a solo, with the first guitarist playing from 1:20-1:34, and the other guitarist taking over solo duties from 1:34-1:50.) Whether it’s one or two guitarists playing that solo, it’s well-played, well-recorded, and doesn’t outstay its welcome. My favourite part of the solo was the note-bend from 1:29-1:30. Very nice.

2:06-2:19 – A little breather before the band launches into the chorus repeating until the song’s finished. This part of the song is not much of anything, so I can’t really comment on it. (There’s nothing to comment on.)

And that’s the song.

Thanks, Michael. I liked that one.