My coincidence-finding friend Michael (Hi, Michael!) supplied today’s coincidence. I’ve known both those songs for years and years – why didn’t I ever notice the similarity?*

(*That was a purely rhetorical question directed at myself. You’re under no obligation to answer it.) 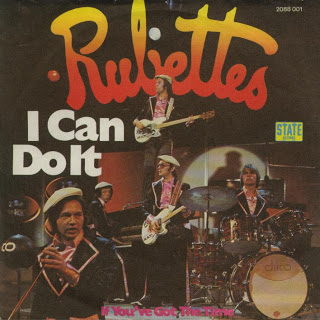 A visitor to the blog (Hi, pb669!) recently commented on a post about “Juke Box Jive” by The Rubettes:

“They had a great follow-up to Juke Box Jive called I Can Do It. Should give that one an airing.”

I must admit that I hadn’t heard “I Can Do It” in years and had forgotten how it went, but once the song got going (after the vocal introduction with all those wonderfully high vocals that would give Def Leppard a run for their money), it all came back to me. And I was surprised by how much it now reminded me of a fairly recent song on the hit parade. It took me a little while to figure out what that other song was, but I finally found it:

On second thought, I suppose that Eagles Of Death metal song doesn’t sound that much like “I Can Do It”. (Maybe it’s just the beat.)

Song of the day: The Rubettes – "Juke Box Jive"

Yesterday’s Song of the day was Sailor‘s “A Glass Of Champagne,” a jolly old shanty with a touch of glam, and that got me in the mood for something fully glamtastic (I can’t get enough of glam).