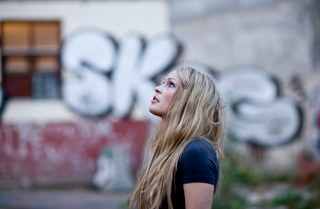 I must admit that I don’t usually play the kind of music on offer today, but I found this particular artist’s biography so utterly fascinating that I just had to share it with you.

I was made aware of today’s artist by the lovely Talia (Hi, Talia!) who’s from a music public relations company. Exactly why Talia thought I, an Australian power pop fan, might be interested in the music of today’s artist is totally beyond me, because it’s about as far from power pop as any music can get. But I’m very glad Talia told me about today’s artist, and you’ll find out why shortly.

By the way, I must tell you something about the contents of today’s post: I am not making any of this up.

Today’s artist is Runhild Gammelsæter. Runhild is from Norway and has a PhD in cell physiology from the Faculty of Medicine at the University of Oslo. Runhild is also a Fulbright Scholar, a model, and a painter. She’s currently the president of Norwegian biotechnology company Regenics AS.

By night, Runhild is an extreme metal vocalist. The style is apparently called doom metal or death doom or drone doom or something. (I really am not making this up.) Runhild’s musical career began when she was a 17-year-old foreign exchange student in the US. At that time she joined a death doom band called Thorr’s Hammer, but eventually left the band when she returned to Norway to further her studies. She then formed a drone doom band, Khlyst. (Honestly, I couldn’t make this up if I tried.)

I was going to give you a big spiel about why I find all of this mind-blowingly fascinating, but I think I’ll just let these two videos do the explaining for me:

Runhild has released a solo album, Amplicon, and that was the reason I received that email from the lovely Talia. Amplicon was originally released in 2008 but in very small quantities. In 2010 the album was re-released both digitally and on vinyl, and with new artwork (supplied by Runhild).

The collection of sounds you’ll hear today may be the oddest thing you’ll hear all day/week/year/decade/ever. Up until now, I thought Björk was odd. I actually thought that in the world of rock music, Björk was the Exemplar of Odd. But today’s music is odder than her – times infinity. I’m not even sure if calling it ‘music’ is accurate – but in the absence of any other musical signposts (I really haven’t heard anything like this before) I guess I’d have to call it music. Actually, on second thought I think it might be better to call it a soundscape.

Before I started listening to the album I had been doing a few things on the computer (like typing this post), but when I pressed ‘play’, and as the album progressed, I eventually stopped doing all those things as I kept listening, dumbfounded. All my brain could do whilst experiencing the album was to let out a feeble “What???” every so often.

After listening to the whole album in one go, I was left with the same feeling I had after I watched the movie Koyaanisqatsi: “What just happened?”

I wanted to describe the album to you to give some idea of what you’re letting yourself in for, but I can’t – and the lovely Talia (why did you send me this music?) didn’t offer any descriptions. I definitely need some help here, so I’d love to hear from an astute listener who can tell me exactly what I’ve been listening to.