Song of the day: A band – "Silver Threads And Golden Needles"

I hope your Christmas was a mighty fine one. (If it wasn’t mighty fine, then I hope it was at least mighty tolerable.)

Over the next few days I’d like to share with you some of the music on the CDs and DVDs I received. (I like sharing. And I’d like to say that, no matter how small or large, I’m always grateful for whatever comes my way. I might change my online name from Mr. Happy to Mr. Thankful.)

I’ll start with a track from a CD by a band that I’ve played on the blog before, but got into trouble for doing so by naming them. (I guess the record company said “Bah humbug!”)

The band is an Australian folk group who were immensely popular in the 1960s, and who have just reformed for their golden jubilee. Their record company recently released a 2-CD compilation of their hits. (They needed two CDs because they had a lot of hits.) It’s one of the CDs I received. And it’s great.

I’ll attempt to circumvent Blogger’s unhelpfulness by renaming this particular band. I’ll play you a track they recorded this year for that brand new golden jubilee compilation. It’s a remarkably pleasant remake of a very well known song, and I think it might now be my favourite version:

Song of the day: A band – "I’ll Never Find Another You" 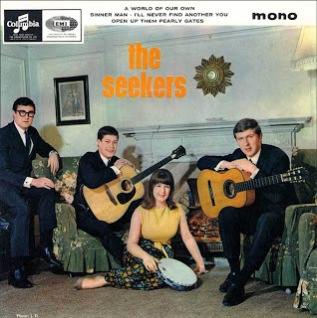 This song starts with what I think is possibly the greatest riff ever played on a 12-string acoustic guitar*:

(Thanks to Deutros for unknowingly letting me borrow the EP cover for the top of this post. Thanks, Deutros!)

(*Come to think of it, I actually reckon it’s one of the greatest guitar riffs ever.)

Song of the day: A band – "South Australia"

1. Because I think this band is great.
2. I’m South Australian.

But mainly because they’re great:

As I’ve said before, anyone gives you any lip about this band (as in: “That band? Phhht. That’s fogey music!”), tell them to come and see me.

By the way, Roger McGuinn discusses the song on his website dedicated to folk music, McGuinn’s Folk Den.

Link
I’m sure I’ve heard this song before. (I’m also just as sure that I haven’t, but it sounds very familiar.) The singer sounds as if he’s singer a better song than the one that’s actually backing his vocals due to the amount of emotion he’s pouring into his performance. I also wondered if the estate of Jackie Wilson can sue the singer for all those “R-r-r-r-r-reet Petite” mannerisms and how the singer, like Jackie, does his best to squeeze the emotion out of his voice. Production-wise, I thought the song was a little weird, especially considering how it sounds like the kind of straight-ahead R’n’B number that’s usually recorded in one take. The weirdness occurs at 2:08 when the audio track suddenly goes mono after being in glorious stereo (bass and horns on the left, drums and strings on the right), and the horns ‘n’ strings stop playing altogether shortly after the song goes mono (at 2:09). And then it all goes back to stereo at 2:24. Very strange. (Maybe it was a clumsy edit). Overall, though, I like the song. But it sure does remind of something. (I just can’t figure out what it is.)

I just found out that Kylie Minogue recorded a version “Give Me Just A Little More Time”. Shudder.

Link
Fabulous. I love how it started with a “Mr. Sandman“-style “bom-bom-bom-bom-bom-bom-bom-bom…”. Love it. “Mr. Songwriter” sounds terribly old-fashioned to me, and I don’t mean from the perspective of the 21st century. I mean that even back then it would have sounded old-fashioned – it sounds like a Fifties song even though it was recorded in 1962.

After listening to “Mr. Songwriter”, I’m now in the mood to listen to “Georgy Girl“:

Now, back to Frank’s suggestions…

Link
When I saw the title of the album this song came from – Someone’s Been Sleeping In My Bed – I instantly thought of Goldilocks and the Three Bears. I guess the performers did as well, considering they start the song by singing “Fee, fi, fo, fum…”. However, as soon as the song started I wasn’t thinking of Goldilocks anymore, I was thinking “Shaft!”. I like the groove, but I think the lyrics are a bit, er… I’m trying to think of the word… embarrassing?

You can decide how cringe-worthy these lyrics are:

“They ate up all my food,
And I don’t stand for such
Don’t tell me it was a woman
‘Cause a woman don’t eat that much.”

And I laughed out loud at this:

The lead singer: “My brand new silk pyjamas…”
The background singers: “What a shame, what a shame…”

And what on Earth happened at 1:58? That was one of the freakiest things I’ve ever heard happen in a song. (And this is coming from someone who’s heard Kate Bush‘s “Waking The Witch” on headphones late at night.) I liked how the freakiness went away and the song returned but it was purely instrumental, although I did wonder if the singing was ever going to come back. (It did.) However, I cringed at the tacked-on-and-horrible-sounding guitar that played some random notes starting at 3:03. (It’s just more freakiness.) And then there was that completely unrelated three bars of a riff (two bars of music, one bar of drumming) starting at 3:25 that reintroduces the singing. This song is turning out to be much stranger than I first thought.

Link
I’ve always known about this song (“It’s a power pop classic!”) but never gotten around to hearing it. Now that I have, I have to say that to me it sounds more country than power pop. Pardon my heresy, but apart from a few power poppy elements (the lead-up to the verses, some of the vocal harmonies) I’d say it’s a modern country song. Despite my possible wrong-headedness about the song, I like it. I don’t love it, but I like it. I might like it more listening to it a few more times. (Update: I’ve now listened to it five times and it still sounds even more like a modern country song to me. I can actually picture “I’m On Fire” being used for boot scootin’. I like how the lyrics emphasised just how “on fire” the singer is (short, staccato phrases do the job here), and I liked it when he sang “Got myself on fire” at 1:01. I don’t know why, but that sounds funny to me. Sort of like “Excuse me, but it appears that I’m on fire”. And I loved the yelp shortly after that, at 1:06. That’s a great yelp.

Thanks for the variety, Frank. Two R’n’B songs, a Fifties song from the Sixties, and a song for line dancing. Excellent. 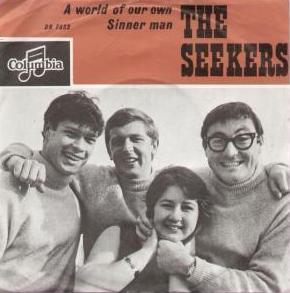 Here’s a band I might get into trouble for mentioning with “A World Of Our Own” (1965):

If anyone – anyone at all – tells you this band is uncool, or that they suck etc, tell them to come and see me…