Song of the day: The Sharks – "Sixty Five Quid"

I received an email from a chap called Paul (Hi, Paul!), and it was headed “The Sharks, again…”. Part of it read:

My first thought was: “Oh-oh. Have I heard of The Sharks? Did I post one of their songs on the blog?”

I had a quick look, and I did indeed post something by The Sharks, in September last year. I had another look at the post to bring myself up to speed about The Sharks, to see if I had liked their music. I was relieved to discover that I didn’t mind mind their music. (Thanks, guys, for making non-horrible music.)

And so to today’s post featuring The Band I Didn’t Remember At All. (Sorry, guys.)

Paul (Note to self: he’s in a band called The Sharks) told me about the band’s new video. And here it is:

Oh, and Paul pointed me in the direction of The Sharks’ latest EPs – all of which are available free of charge (woohoo!):

Song of the day: The Sharks – "Jimmy" 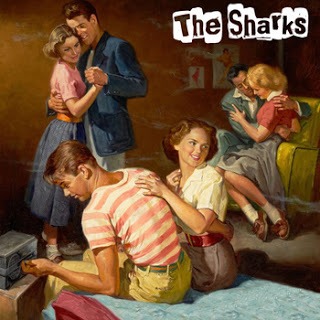 I recently received an enlightening email from a chap called Paul (Hi, Paul!) about a band from London called The Sharks. The email was enlightening because I learnt that Paul is a member of The Sharks, and that The Sharks have recorded and released three EPs. I didn’t know any of those things before Paul emailed me. Thanks, Paul. Oh, and the band is actually a duo:

I also discovered that there’s an English band called Sharks, but they’re not The Sharks. The Sharks that aren’t The Sharks are from a punk band from Leamington Spa. Now I’m in the mood for a lamington:

Anyway, Paul from The Sharks pointed me in the direction of the band’s Bandcamp page which is chock full o’ songs. That page contains the contents of their three EPs each containing four songs which, if you’re counting, amounts to 12 songs.

By the way, all the songs are free. Bargain!

And now to the songs…

THE SONGS – PART 1: JUDGING A BOOK BY ITS COVER
I shimmied on over to The Sharks’ Bandcamp page, but I have to say that before listening to any of the songs I was slightly fearful of what I saw. I looked aghast at some of the song titles. “Everybody Just Rapes Me”? “Dirty Horrible Jesus”? “Sinners Song”? “Bloodlust”? “Give It Up”? “Rock Is Dead”? They’re not the cheeriest song titles I’ve ever come across. Judging by those titles, my guess was that there may be a bit of self-loathing, Grunge-style, going on here. Oh dear. (Or, putting it another way: Oh-oh.)

THE SONGS – PART 2: ACTUALLY LISTENING TO THE SONGS INSTEAD OF MOANING ABOUT THE SONG TITLES
I’ve now listened to all the songs, and I’m happy to say that listening to them wasn’t anywhere near the ordeal I thought it was going to be.

THE SONGS – PART 3: REVIEWIN’ THE BEASTIES
Now, because you don’t want to waste your time reading the extended ramblings of an Antipodean blogger, I’ll try to review each song as briefly as possible. (This post is already long enough.) I’m going to set myself a goal of reviewing each song using no more than six words.

What I reckon: EP with DIY garage/punk feel.

What I reckon: More like power pop than Bloodlust.

What I reckon: Poppier than both Bloodlust and Stockwell Love.

1. “Give It Up”
Reminds me of The Cure’s “Inbetween Days”.
RECOMMENDED.