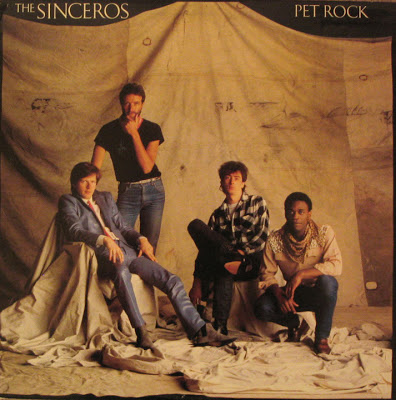 Ages ago I posted a couple of tracks by The Sinceros, a band I only knew for two magnificent songs in 1979 (the two tracks I posted).

The reason I mention that is because Michael, the Regular Suggester Of Horrid Songs From The 1980s, has offered a song by The Sinceros this week.

0:00-0:17 – Oh, man. This is wonderful. I think this a magnificent start to the song. It may be a bit too low-voltage for a New Wave / Power Pop song (The Sinceros were considered a new Wave / Power Pop band), but I don’t care. I think the melodies are superb, the instrumentation ideal for them, and the production eminently suitable for this kind of music (i.e., mid-tempo pop).

0:17-0:25 – This second half of the introduction (which I’m guessing is the chorus, but for now I’ll call it the introduction) isn’t anywhere near as marvellous as the first half, but it’s still very nice. (It’s a heap better than a lot of the horrors Michael has sent me in the past.)

0:32-0:47 – Here’s the verse. (I think.) I like the vocal melody, but I’m not keen on the instrumental backing. I’m guessing the band decided to change things up a bit, and not have the whole song in a smooth, steady, mid-tempo beat. I don’t find it very convincing as a musical device to break the potential monotony. I can image something else for the instrumental backing, something involving palm muted arpeggios from the guitar, and a bit of slap from the bass. But the song’s already been recorded, and not by me (and not this week).

When Michael sent me “Falling In And Out Of Love”, he asked if I could shed any light on a mystery sound in the verse, from 0:33-0:43. It’s a short sound, it’s in the left channel, and it appears at regular intervals. As far as I can tell, it’s a synthesizer that’s been programmed to emulate a flute. That’s what it sounds like to me.

0:47-1:03 – Oh, that chorus. That wonderful, wonderful chorus. (I was going to call it “That glorious chorious”, but thought you might have a limit as to how much wordplay you could tolerate in a blog post.)

1:03-1:11 – The not-as-wonderful second-half of the chorus. But this time the band plays it more dramatically, and I think it improves it. And at 1:09 there’s that great chord again.

1:18-1:34 – Another verse. It’s not that much different to the first verse, so whatever I said about it earlier please place that here. Thank you.

Actually, I didn’t mind the second-half of the chorus this time. (Maybe I’m getting used to it being there.)

2:01-2:09 – This is the first part of the chorus being repeated ad infinitum as the band motors its way to the end of the song.

(Note to self: It’s not ad infinitum, Peter, because it does actually finish. It’s ad finitum.)

The thing I love about this end section is the backing vocals: they sing the phrase “In and out of love” angelically, and with a cute little “love!” at the end of it. Excellent.

Thanks, Michael, for picking a non-dud song this week.

Song of the day: The Sinceros – "Worlds Apart"

That was the band’s second single.

Wikipedia tells me that The Sinceros released six (!) singles in total. I have no idea why, because I thought after “Worlds Apart” had failed to burn up the charts the band disappeared off the face of the Earth. But at least they released two albums: The Sound Of Sunbathing (1979); and Pet Rock (1981).

I love Ron’s bass playing, and “Heaven (Must Be There)” is a mighty decent pop song.