Song of the day: Taxiride – "Afraid To Fly" 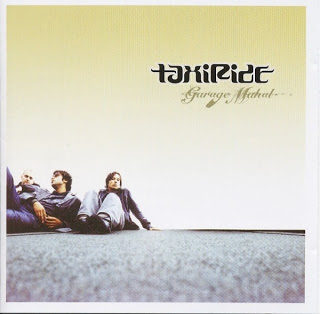 Ah, the joys of op shops…

I was in an op shop the other day (I think they’re called “thrift shops” in America and “junk* shops” in England – shops that aid charities by selling secondhand goods ultra-cheaply), and made a beeline straight for the books and CDs (as I always do). I was extremely pleased to find a Taxiride CD there for $2. I’d heard very little of Taxiride – only a couple of radio hits – but I remembered that one of the power pop blogs I visit regularly speaks highly of them from time to time. (I’ve forgotten which blog it is.) So I handed over a $2 coin (we have those in Australia), and I’m now the owner of Taxiride’s 2002 album, Garage Mahal.

Now that I’ve heard an entire Taxiride album, I must admit that I’m underwhelmed. It’s very slick modern rock, and seems as if it was designed specifically to be played on commercial radio. That in itself is not bad thing as far as I’m concerned, but the album doesn’t sound terribly unique to me. It sounds like it could have been recorded by any number of other bands that sound like Taxiride. I didn’t get the sense of “Oh yeah, that’s Taxiride alright – it couldn’t be anyone else.”

Anyway, here’s one of the songs from the album:

Incidentally, Garage Mahal contains “Creepin’ Up Slowly”, the biggest hit the band ever had – it was a Top Ten hit in Australia (it got to number six):

(*I hope they’re not called junk shops in England, because I reckon most of the stuff sold in these shops are not junk at all.)