Song of the day: Ted Mulry – "So Much Love In My Heart"

My friend Stonefish (Hi, Stoney!) recently posted a song called “So Much Love In My Heart”, a catchy little number from the 1970s by an Australian band called Mr. George. Because it has a rather catchy chorus I was rather tempted to post it here, too, but discovered that I already had.

The song was written by the magnificent Australian songwriter/recording artist Ted Mulry, so I thought to myself: “No problem – I’ll just play the original as performed and recorded by Mr. Mulry”.

I tracked it down (pun almost intended), had a listen and thought: “Hmm, I don’t think Ted’s version is as good as the one by Mr. George – maybe I’ll skip it and not put it on the blog”.

But then I listened to it more intently (i.e., properly) and discovered something rather surprising: a glaring mistake played by the guitarist.

I don’t know if I’ve told you this before (I probably have), but I love hearing mistakes on records – not for any sense of schadenfreude (I don’t wish ill on anyone, or derive any joy from people doing embarrassing or regrettable things) but because it lets me know that actual human beings were involved in the recording process. You know – people. Not machines. People. Playing music.

Hearing a mistake also gets me thinking about the recording session, and then I start to wonder a few things:

It’s for all those reasons (and the catchy chorus of the song) that I’m playing it to you today:

And if you want to hear the Mr. George version but don’t want to go to my old post or visit Stonefish’s, here it is:

(*The guitarist was a he. It was either Billy Green or Phil Manning.)

Song of the day: Ted Mulry – "Falling In Love Again" 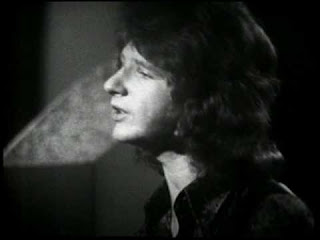 Way before Ted Mulry put on silk flared pants and platform boots in the early Seventies as leader of the Ted Mulry Gang, young Ted was a budding songwriter. He had originally intended for his songs to be performed by other artists until it was suggested that he perform his own material. During his singer/songwriter phase he released a couple of gorgeous ballads. Ted wrote the first one – “Julia” in 1970 – but the second one was written and produced by the dizzyingly prolific Harry Vanda and George Young. Not only could they supply every rocker in Australia in the 1970’s with fist-pumping anthems, Vanda & Young were also able to pull out of the bag something as sweet as this:

And here’s the ballad that was written by Ted:

Song of the day: Ted Mulry – "You’re All Woman"

Today’s song is a two-for-one deal.

First up, here’s Ted Mulry with his song, “You’re All Woman”:

There’s also a live version – but that’s not the two-for-one part of this post:

Ted Mulry wrote “You’re All Woman” for Sherbet who duly recorded it for their fourth single which, thanks to Ted’s songwriting skills, became their first Top 20 hit:

You may have decided which one you prefer, but I love ’em both.

Today’s song mixes music with alcohol and an extremely laidback vibe. Those elements make it the perfect seasonal song.

This combination of music, alcohol, and laidbackiness may cause you to celebrate (“Hooray! Booze in a Song of the day! Finally!”) but it makes me woozy and I can’t think straight. Don’t get me wrong – I like today’s song, it’s just that whenever I listen to it I feel as drunk as they sound. The band were not terribly concerned with anything at all during the recording of it, such is its effectiveness in conjuring up thoughts of lazing on a beach with a specific drink in hand.

When this song was suggested to me*, I pooh-poohed the idea of presenting it, thinking “Nah, I don’t like it that much.” Although I hadn’t heard the song in years, I didn’t need to play it again to remind myself what it sounded like because it was a song I was very familiar with. So I went to sleep that night, safe in the knowledge that I wasn’t going to inflict this song on anyone because I had remembered it not being that great. (I have a policy: If I don’t like a song, it ain’t gonna play it for ya.)

However, when I woke up the next morning the song was stuck in my head. And it stayed there all day.

Without much further ado (’cause there’s certainly been more than enough ado already), here for your imbibing pleasure is the Ted Mulry Gang and their ode to doing nothing at all (and enjoying it immensely), “Jamaica Rum”:

Here’s the Ted Mulry Gang dusting off a very old song, slapping on a coat of glam paint, and ending up with an irresistible little ditty:

Incidentally, The Ted Mulry Gang’s biggest hit in Australia was “Jump In My Car,” written by Ted and fellow Gang member Les Hall. It was covered rather infamously* by David “I’m David Hasselhoff!” Hasselhoff.

Here’s the much, much better original:

(*I’ve provided a link to The Hoff’s version purely for historical purposes. You’re under no obligation whatsoever to click on it. I think DH’s version is dire, but you may feel differently, depending on your views of The Hoffmeister. I think he’s entertaining as long as he stays as far away as possible from a microphone.)