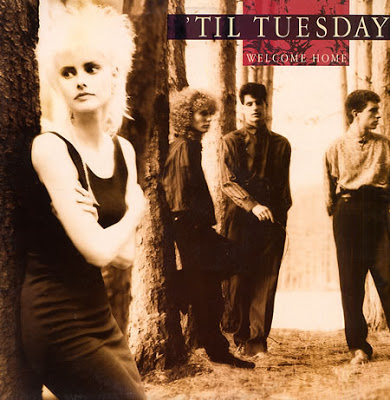 In all this Christmas holiday festivity period I completely forgot about this week’s Educating Peter. Oops.

I’ll try to make this post a quick one, because I’m still in Christmas mode and not thinking much about the computer, or the blog, or putting posts on the blog etc. etc. It also doesn’t help that I’m still full of Christmas food. All those mince pies, gingerbread, and Christmas pudding, among other things, have turned my brain my brain to mush. (Christmas!)

Right. What do we have this week?

This week, regular supplier of 80’s ditties Michael (Hi, Michael!) is having a break while I tackle a song suggested by Steve.

Up until Steve handed over this song, my knowledge of ‘Til Tuesday extended to exactly one song: “Voices Carry“. I like that song very, very much.

On to the song so I can finish this post and go back to not thinking.

0:00-0:04 – This song starts with both a positive and a negative. Negative: this song starts with an insipid drum machine. Positive: the drum machine lasts four seconds. (Which makes me wonder why they bothered putting it in the song in the first place. Maybe the band were making A Statement about something or other – something that’s eluding me because my brain is mush.)

• It’s jazzy (thanks to some minor seventh chords)
• I don’t like the vocal mannerisms of singer Aimee Mann.
• When Aimee sings “…so put out all the fires” (from 0:42-0:45), she sounds like Chrissie Hynde.

I wasn’t planning on writing this much about the song. I was hoping to have a quick listen, mumble something, and then go do something else.

So far, this track’s not doing much much for me. But it’s not making me go “Yuk!” (apart from those four seconds of drum machine at the start). I’m semi-enjoying it in a “not too bad, but nothing sticking out as anything terribly unique” way. I’m listening to it, and it’s pleasant.

2:17-2:54 – A guitar solo. When Steve had suggested this song, he mentioned that he really liked the guitar solo. It didn’t float my boat (I thought the guitarist used his whammy bar a bit too much), but one thing I did like about the solo was how it began. It sounded like the guitarist who was playing his part in the chorus kept on playing and launched into a solo (i.e., he continued playing after the chorus).