Song of the day: Uncanny X-Men – "How Do You Get Your Kicks"

After yesterday’s song having the word “kicks” in its title I thought I’d make this week a “kicks”-themed one, with each song containing the word “kicks”. I had a look through my (not as big as I’d like it to be) music collection, and unfortunately I don’t have many songs with the word “kicks” in the title. So this is going to have be a very short “kicks” week I’m afraid. (A three-day week, actually.)

Here’s an Australian tight-pants-wearing, poodle-hair-sporting rock band from the 1980’s asking a fairly reasonable question for anyone wanting to party*:

I must confess that I was almost not going to play you today’s song, because I like only a bit of it (the guitar riff) and not much else. But if I didn’t play it to you, this would have been a two-day “kicks” week.

(*I think that “partying” was pretty much the only thing a tight-pants-wearing, poodle-hair-sporting band was keen on doing in the 1980’s.)

Today’s coincidence comes yet again from one of Mr. Fabulous‘s suggestions.

Australian 80’s rock band Uncanny X-Men released their first single, “Pakistan”, in 1982. The melody in the verse starts off like this:

I have a feeling that whoever wrote that song may have heard this at some time when they were a kiddy:

Thanks for pointing that out, Mr. Fabulous. I would probably have never known otherwise.

Song of the day: Uncanny X-Men – "Time Goes So Fast" 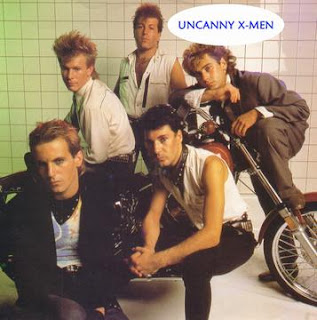 Actually, there were two Uncanny X-Men tracks in contention for today’s song, and I had trouble deciding which one to play you. The other contender was their follow-up single “Everybody Wants To Work”, which nowadays I think might be catchier than “Time Goes So Fast” – but “Time” was the only Uncanny X-Men single I ever bought (mainly because of the chorus), so it’s a sentimental favourite.

To save myself all this mental anguish, I might as well play you the other track and let you decide which you prefer: