Cyndi Lauper, the girl who just wanted to have fun in the 80’s, wasn’t having an awful lot of fun towards the end of her pop career (she’s recently reinvented herself as a chanteuse, believe it or not).

Back in the twilight of her pop phase, one of her unsuccessful efforts was this pumping tune, “Hole In My Heart (All The Way To China).” It was recorded for the not-entirely-successful 1998 movie Vibes starring Jeff Goldblum, Peter Falk, and, er, Cyndi Lauper:

Incidentally, I thoroughly recommend not listening to this song on headphones – Cyndi’s voice keeps moving in the stereo picture throughout the song and just won’t sit still in the middle. It’s very unsettling. I can tolerate it in Electric Ladyland (the most stereo-panning album of all time), because, well, those were the days, man, but I have an extremely tough time trying to follow Cyndi’s voice all over the soundstage for three minutes and 58 seconds.

Olivia Newton-John recorded “Twist Of Fate” as the theme tune from the movie Two of a Kind, the 1983 turkey which reteamed our Livvy and John “Thanks for giving me a second chance on my career, Quentin. Can somebody now give me a third chance?” Travolta after their success together in Grease.

Olivia had left her “Banks Of The Ohio” and “I Honestly Love You” soft country rock and ballad days far behind her when she released “Twist Of Fate.” (She’d even moved on from when she was Physical in 1981.) “Twist Of Fate” is a rockin’ little ditty, full of insistent 80s synths, but with enough guitars and tunes for me to say “Yep – it’s power pop”: 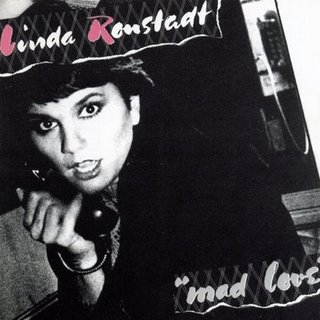 I’ll be presenting an occasional series on songs that I consider to be power pop by artists not normally associated with power pop.

Our first example features my second-favourite female artist of the 70s and 80s, Linda Ronstadt, who, you’re no doubt aware, was for years and years a soft country rock ingenue. Let’s just pause for a moment and reflect on why I was in love with La Linda in the 70s:

OK, back to the music.

After a stellar career breakin’ hearts with ballads, Ms Ronstadt decided to (metaphorically) put on a skinny tie and rip up the charts with this little two-and-a-half minute ditty:

I don’t know why Ms Ronstadt decided to jump on the New Wave bandwagon. Maybe she wanted to explore musical avenues she hadn’t gone down before, and New Wave was there for her to dip her musical toes into. Or maybe she was fed up with soft country rock and wanted to break free from the prospect of being pigeonholed as a heart-breaker for the rest of her career. Or – I think this the most likely scenario – maybe Linda’s record company wanted her to cash in on the latest trend by recording a song that sounded more like it belonged on Blondie‘s Parallel Lines than on a Linda Ronstadt album.

Anyway, after “How Do I Make You” and Mad Love, Linda Ronstadt went in sorts of musical directions. Wikipedia does its best to chronicle the saga.

Here’s video of Linda performing “How Do I Make You”, in what must be the only time I’ve ever seen her wearing shoulder pads (ah, the 80’s):

(*And thanks for putting away those shoulder pads, Linda.)