Some time ago I played you two songs from a mystery band called Chinook. The mystery was that a two-song CD sampler of their music was sent to me, and I had no idea who sent it.

I’m pleased to say that I subsequently found out who sent the CD. It was Ed Reed (Hi, Ed!), the band’s principle songwriter and singin’ dude.

Now, you may be wondering why on Earth I’d be mentioning all of this. I’m mentioning this because Ed did it again. He sent me another CD unannounced – but this time it was an EP. (Seven tracks! Yay! Five more than two!) On the EP are the two songs from that two-song CD sampler Ed had sent earlier (the mystery one), but also five other songs that I’d not heard before. I’m guessing that not too many other people have heard those other songs before either, because the EP hasn’t been released yet (well, not officially). According to Ed, that’ll happen at their CD launch at an entertainment and frivolity establishment on the 23rd of this particular month.

(Note to self: just say “at a venue on January 23”, Peter. Don’t try to say something in a cryptic way. It doesn’t make you look clever – it just makes other people annoyed.)

Actually, I’ll let the poster for the gig let you know as well… 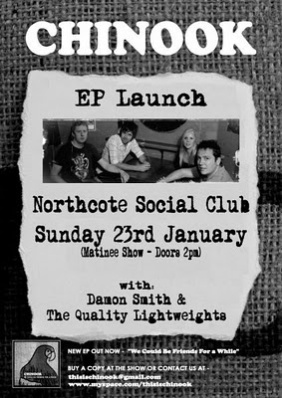 As for today’s Song of the day (that’s the reason you came here, isn’t it?), I’ve decided to go with the only track that Ed doesn’t sing lead vocals on. This song is one where the main vocals are supplied by the band’s keyboardist, Moira Reed (Hi, Moira!) – who may or may not be related to one Ed Reed.

Hopefully, me choosing that song over all the others won’t bother Ed too much (e.g.: “You chose that? How could you? I’m the star! They’re my songs! Oh, why did I ever let our keyboard player sing one of the songs? I’m the star! It’s not fair!!!” etc).

In the interests of band harmony, here’s Ed singing a song on the EP:

I hope the band will still be together after this post.

So, if you’re in Australia (or, more specifically, in a Victorian Social Club) on January 23 (see above), feel free to go see a band called Chinook. And ask Ed if he’s going to let other people sing his songs from now on.

I don’t know if you remember yesterday’s Song of the day post (if you had my memory, you wouldn’t). It involved a mystery CD I received in the mail. The two-track sampler CD featured a band called Chinook, and the mystery was that I had no idea who sent it to me.

That is, until now.

It was sent to me by one of the members of the band, Ed (Hi, Ed!). Ed is a friend of a friend who had my mailing address, and he thought I might be interested in hearing the CD.

Song of the day: Chinook – "Black and White"

Last week I received in the mail a two-track CD sampler from an Australian band called Chinook, and I have absolutely no idea who sent it to me.

Accompanying the CD was this blurb:

The story of Chinook starts in the summer of 2007 when four friends put all their equipment into an East Brunswick townhouse and began writing songs. Since this inception the band have continued to please their loyal supporters playing shows in and around Melbourne and also venturing interstate for the odd show.

In 2008 they released their debut EP ‘Little Solo Project’ which showcased their own blend of melodic rock and blissful folk. The creation of this particular style of playing and song writing is largely due to band members originating from different sides of the globe in Australia, New Zealand and England.

Now in 2010 they have just finished their second EP – a seven track record, recorded and produced by David Briggs (Little River Band) at his North Melbourne studio, Production Workshop. Still to be titled, this new released strengthens Chinook’s abililty to create songs with a broad varity of pop/rock sensibilities.

Enclosed is a sampler CD with two tracks taken from the new EP with the expected release date to be in early 2011.

We hope you enjoy.

Beat Magazine Review
Black & White (Independent)
“Melbourne’s Chinook are working on a second EP, due out early next year. Black & White is a preview and they’re sounding great – the simple, harmonised sound has hints of pub rock roughness and a great Oasis-worthy hook. Production is great too.”

That blurb didn’t help at all. I still don’t know who sent it to me.

Anyway, here are the songs in question:

One thing I love is receiving something completely unexpected and enjoying it, and I’m happy to say that I enjoyed those songs. But who on Earth sent me that CD?